To say last week was hectic is an understatement.

for the EVA London Conference preconference which is organized by EVA and V&A Digital Futures. It was good to see Wasi Daniju and Rikki Indymedia who contributed to my work. Many thanks to them! Here is the paper from the conference proceedings.

The next day we went full into the first day of the conference with Dan Crow as keynote speaker on How Songkick is using Technology to Change Live Music.

Wednesday became even more exciting when I scooted to Whitehall to join the other anti austerity campaigners for a protest against budget cuts Balls to the Budget and then scuttled back to Covent Garden in time for lunch and to chair a session at the conference. Some friends were arrested. The two parts of my world seem very distant but yet within 10 minutes walk from each other. But my exhibition was on protests in austerity! not so remote after all.

I so wanted to stay for the Art that Makes itself book launch by Paul and Daniel Brown – Brown & Son because I saw the recording of the talk they gave by Watermans – A symposium supported by the Computer Arts Society addressing topics relating to generative art and its collective histories. Here is a very interesting interview too. But I had a union meeting to get to.

Saturday had a different tempo when I joined Petra Kuppers for a meander jointly lead by the wonderful Stephanie Heit (from the US), in the company of Anna Hickey-Moody , her brother visiting from Australia, Andy, and fellow Scrabble player, Antje Lindenmeyer, lecturer from Warwick University!

Walk along the river with us, and let’s find our hollows, halls, and underpasses. With optional refreshments at Gabriel’s Wharf or the British Film Institute (whatever your flavors of escape). We met at 2 in the Adopting Britain exhibit, Spirit Level at Royal Festival Hall, about immigration and the UK 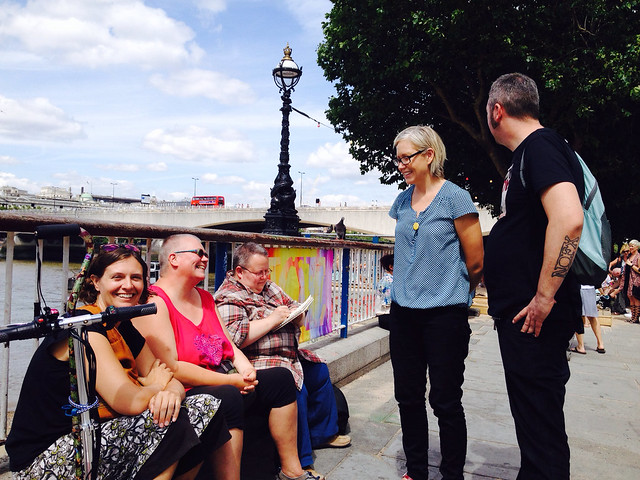 Floating with the jetsam of London South bank ers feeling the breeze with taste of mango frozen yoghurt on my tongue pic.twitter.com/Qn7xqGd53t

The day was not finished – it ended splendidly with Zara’s lovely 30th birthday party and I got home after midnight, feeling definitely old and yet a little like Cindrella wondering ‘when was the last tube home on the Jubilee line?’!